I am sitting in the waiting room of a Spanish vet with a sick cat and Iggy Pop. It feels like the strangest dream.

We are in Ibiza making a feature film, a noir thriller called Blood Orange. Iggy is playing the lead, an ageing rock star married to a beautiful seductress, and things get complex and dark. In these days of corporate movies and haemorrhaging budgets, it’s something of an anomaly. It’s the first feature directed by Toby Tobias, who wrote the script.

Toby is one of the hardest working people I know. He got Blood Orange off the ground with deft skill and blind faith. Blood Orangeis financed by investors, family, friends and credit cards. In the midst of this intense schedule, 15-hour days, 15 days to shoot the film, there is the feeling that something good is happening. There’s a crew of 25 brilliant technicians and creatives from Ibiza, England, Barcelona and Madrid. No one’s being being paid up front but we all care.

And in the middle of it all is Iggy. Iggy was a surprise; Toby approached his agent, he liked the script, liked the director, accepted that it was low budget, that it would be tough, and that the living conditions would be basic.

Iggy has a deco villa with views to the ocean, opulent on the surface but devoid of character. It’s built like an ocean liner, clean lines and balconies and turquoise pool. He calls it the “dorm”. We are like a dysfunctional family. The “kids” are the other actors: Ben Lamb, Antonio Magro and Kacey Barnfield.

My job is to “look after Iggy” and the other actors, but primarily Iggy. It’s the strangest and most dazzling job I’ve ever had. I have dropped everything, abandoned my family and stepped into the dream.

For me, Iggy’s music was a series of teenage epiphanies that led me from New Romantic shiny Pulp to a dark growling poetry that spoke about distant cities and limitless possibilities.

When I meet him, I’m so nervous I am basically mute. He has a huge grin and blue, blue eyes. We make the short drive to the set; Iggy asks if “this interminable mind-fuck will ever end”. I realise it’s going to be fine.

We have an editor on the set and some of the actors clamour around to watch the rushes. Iggy doesn’t. When I ask him why, he says: “I don’t need to. I know I’m fucking cool.”

Mostly we try not to destroy the location villa; it’s the epitome of luxury.

On the set Iggy strides around with a shotgun and dead rabbits slung over his shoulder; there are corpses and a lot of blood. Off set he reads his Kindle, the cat purring on his belly.

Very occasionally being with Iggy feels normal, but mostly it’s surreal. Our day has a rhythm; coffee and eggs are my collateral. Being with him is like having an amazing perspective on the world. I ask him if he prefers touring or acting. He replies: “They both suck.” On Nico: “She taught me two things, how to drink red wine and give oral sex”.

There are moments I’ll never forget: hearing his songs drifting down from the balcony in the morning, or looking for his script and glasses. “There was a time when all I had was a T-shirt and a penis and that seemed to be enough,” he says. But most of all it will be the cat.

The cat has adopted us as his family. Grey and white, and kittenish, he actively seeks the company of Iggy. The “butler”, a camp guy who lives in the garden in a cottage, tells us the cat “just turned up”.

Meanwhile we ricochet between one millionaire’s villa to another, like a Hockney painting, of whites, blues and greens, from our bizarre fictional world where dark events play out daily, to our dysfunctional family life.

We do not leave our villa – we are not near anywhere, and there is no time anyway.

We wonder who is in charge – Iggy? Jacques, the omnipresent owner of the location villa, or Chris, our smiling producer? It’s probably the cat.

Then one night the cat is sick. He’s listless and limp and seems to have difficulty breathing, and there’s some matted hair on his side. His benefactor is Eleanor, who’s here to learn about makeup, but bizarrely is sometimes Iggy’s stand-in. It’s about midnight and we’d just finished shooting, too late to take a cat to the vet. We tell the producer our concerns, and he rolls his eyes. I sleep with the cat on my bed, wrapped in a blanket; he drinks a tiny bit of water. I’m half expecting him not to make it through the night. Would we use the shallow grave on the set? Dark dreams stalk my sleep.

At breakfast, after hearing the news, Iggy says, “I think we should make the kitty our priority today.”

It’s been an intense schedule; this is his first free day in two weeks. Earlier I’d asked him if he wanted to go to a spa. “I don’t want to go to a fucking spa. What am I going to do, put seaweed on my face? I hate that music they play.”

So we drive to a suburban vet with our driver Jos, Eleanor and the kitten and agonise over its likely fate. It’s not looking good. Somehow the cat’s fate has become as important as the movie. Reality and fiction slide into each other.

We rename the cat – bizarrely christened ‘Sugartits’ by the crew – to ‘Pop’. Iggy laughs. We must be an unconventional sight in the waiting room, even in Ibiza, but no one visibly raises any eyebrows. The vet is a gentle sincere young woman who explains that the cat has probably been in a fight or fallen, and is having trouble breathing. And is female. Iggy’s surprised. “She kind of acts like a he.” She’s going to need to stay in the hospital for a few days on an antibiotic drip.

When a group of people work in such close proximity there needs to be an outlet for the collective neurosis. For a while it was the catering, which was often both surprising and disappointing. One of the commandments of film-making is Never Compromise on the Catering.

Toby’s devastated, he’s an amazing cook. The all-time low is pasta with sausages. Iggy is diplomatic. “It’s like welfare dinners at elementary school.” But some of us plot increasingly wild revenge scenarios on the chef.

But our team has collective neurosis and the thing that bonds us is the cat – its survival and fate.

Next we have to find her a home and it’s going to be a challenge. Ibiza is an island of cats, and everyone who wants one has one, and we only have a few days.

Jacques, the villa owner, is the obvious candidate, but he has four already. He tells us mysteriously: “I am the cat wrangler, I tell them the truth.” Bizarrely Iggy agrees. “He is.” I realise the cat is taking up as much of my time as the film.

The next day is Iggy’s other day off and we visit the cat at the vet. She’s looking much better, and the vet tells us she has three broken ribs, is in a lot of pain and would have died if we hadn’t brought her in. 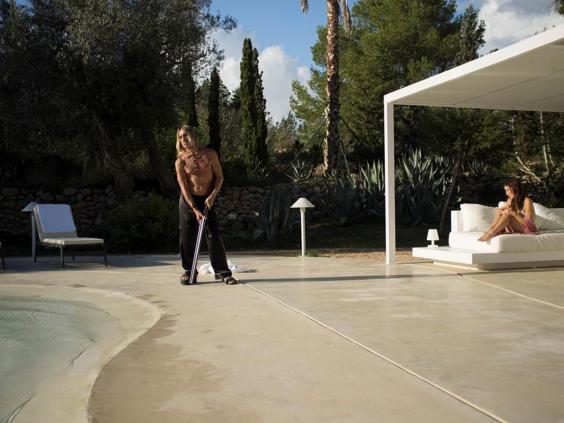 Many conversations about pet passports ensue. Iggy can’t take her to Miami – he has dogs. Eventually Sondra, who looks after the villas and is as mischievous as the cat, and similarly seeks the company of Iggy, agrees to take her. It is an emotional moment.

The film wraps. It is done. I tell Toby “it’s always been about the cat” and he agrees. To make a movie in 14 days seems like a small miracle. No animals were killed; in fact, the producer moves hedgehogs from the road at night and Ben rescues the beetles spiraling upside down in the pool. And the cat is saved.

For us the cat underlined that Iggy was someone great. We knew that he has a brilliant mind, is self-effacing, funny and subversive, but the cat made us love him unreservedly. At the airport Iggy asks: “Do you have any Euros, hon? I gave all mine to the cat.”

When I get home the world slides back into focus and it’s rather grey. I remember I have a screenwriting book called Save The Cat!I dig it out – the writer explains the Save the Cat scene. “They don’t put it into movies anymore. And it’s basic. It’s the scene where we meet the hero and the hero does something – like saving a cat – that defines who he is and makes us, the audience, like him.”